You are here: Home / Demographics / Moving Away From the Major Metropolitan Areas: the 2017 Estimates 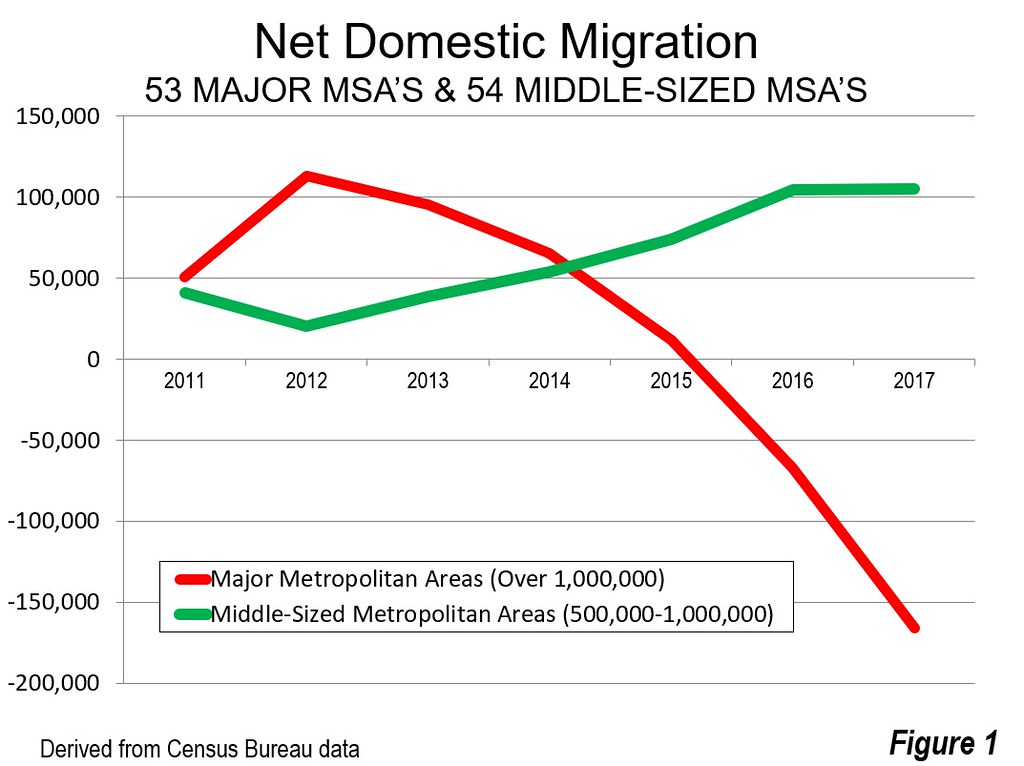 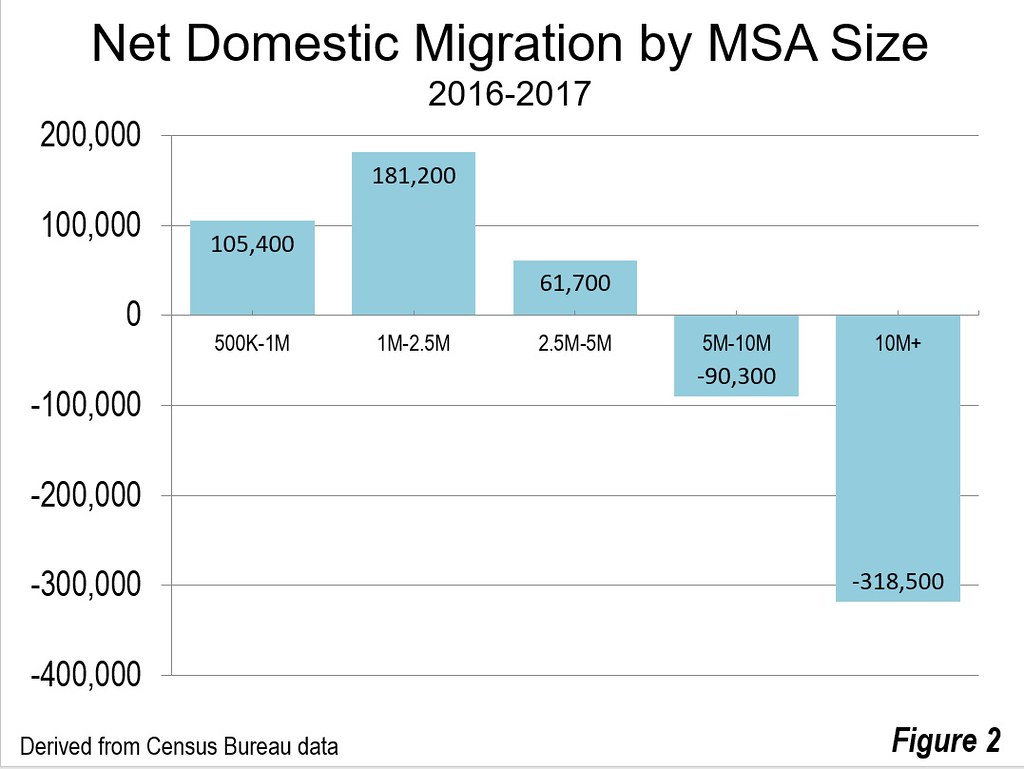 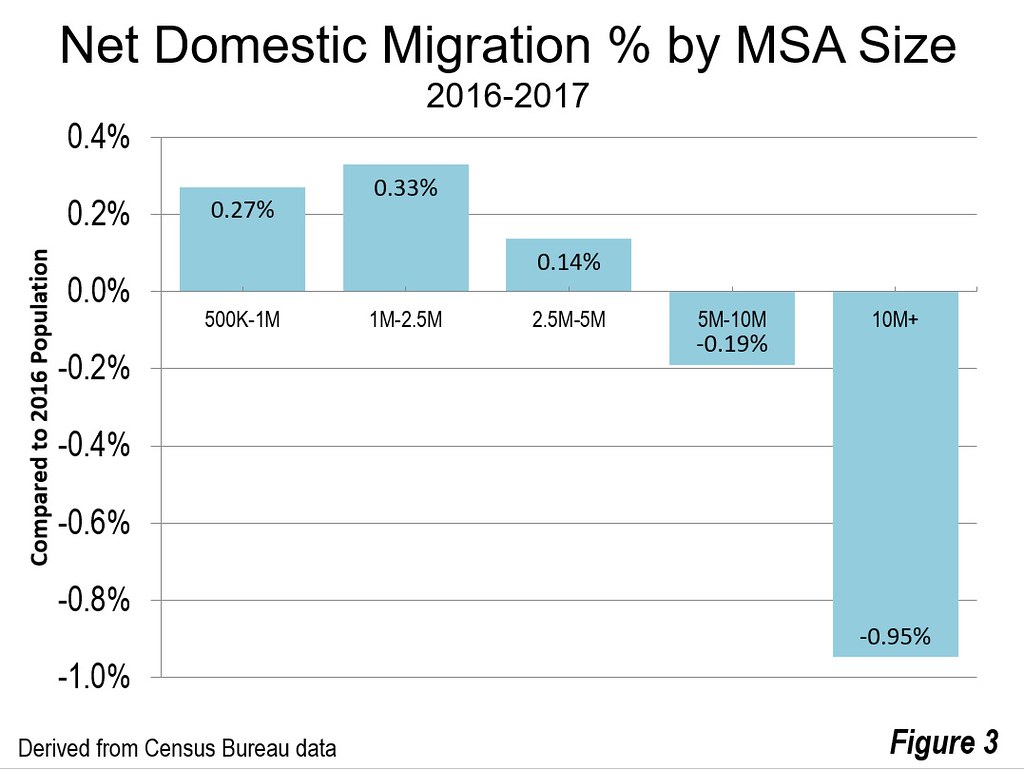 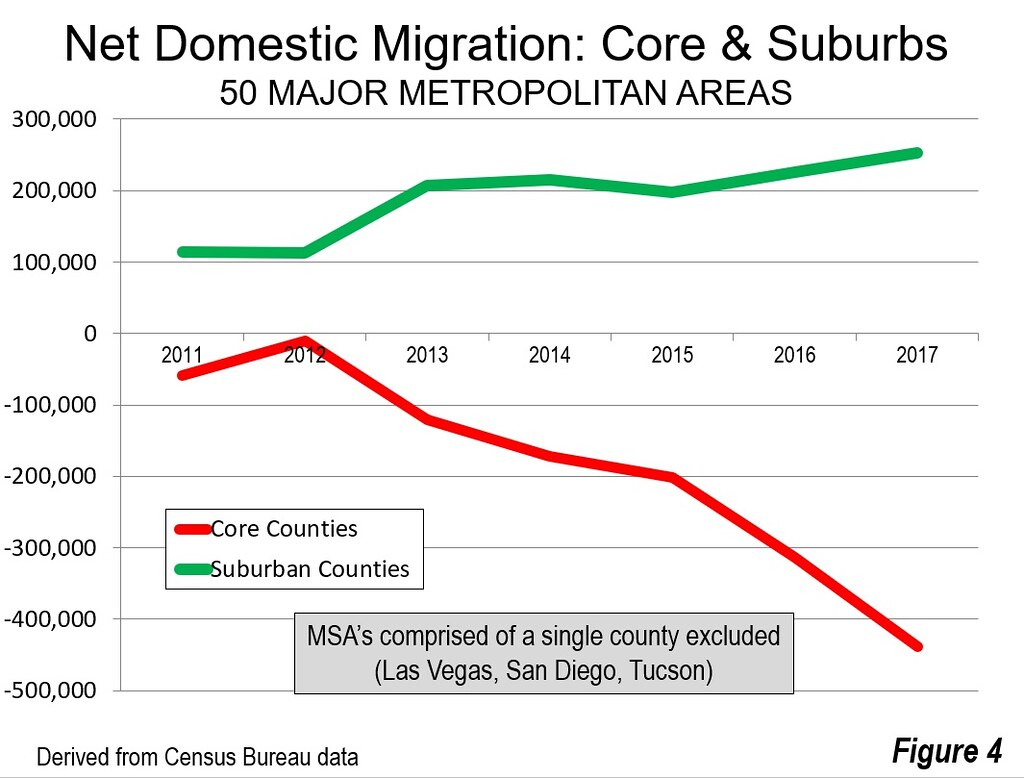 All this resembles a rerun of the 2000s — with Austin and Las Vegas ranking number one and two. Virtually all of the others in the top ten also experienced strong net domestic migration in the 2000s.

The major metropolitan areas losing the largest share of net domestic migrants are also very familiar from the 2000s, such as San Jose, New York, Miami, Chicago and Los Angeles (Figure 6). “Boomtown” San Francisco, which had done well in domestic migration earlier in the decade, has quickly fallen into the bottom 10, a downward acceleration noted by the Wall Street Journal (see: “San Francisco has a People Problem”).

The metropolitan areas in the 500,000 to 1,000,000 population range with the greatest net domestic migration are strongly weighted toward retirement destinations, with five of the top 10 being in Florida, led by Lakeland. Lakeland is also close enough for commuting to Tampa-St. Petersburg and Orlando, which rank among the top 10 major metropolitan areas. The top 10 also includes Boise, ID, as well as Fayetteville, AR-MO, where strong growth has been propelled by Wal-Mart headquarters and related economic activity. The largest domestic migration loss among all metropolitan areas over 500,000 was in Honolulu (Figure 7). 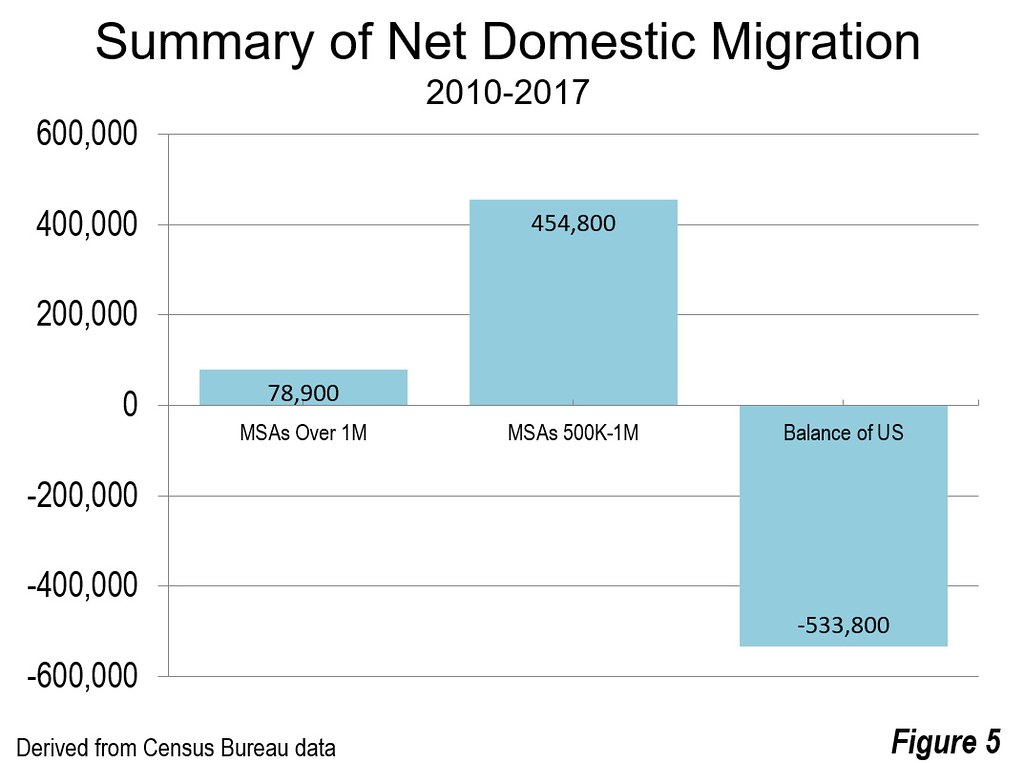 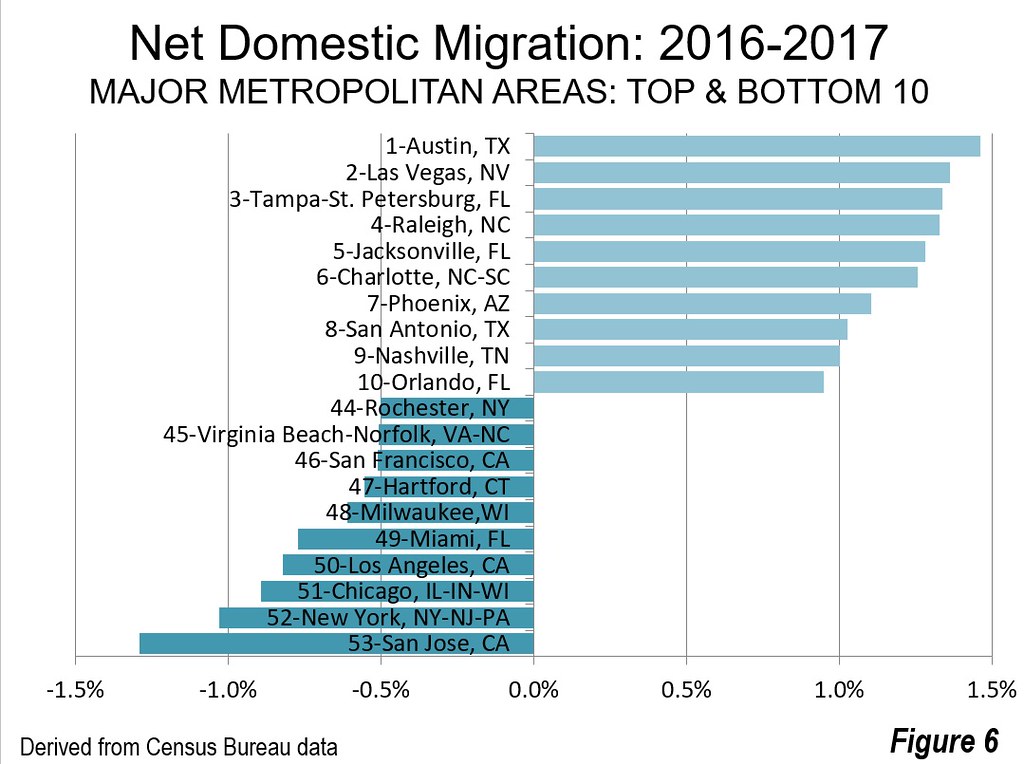 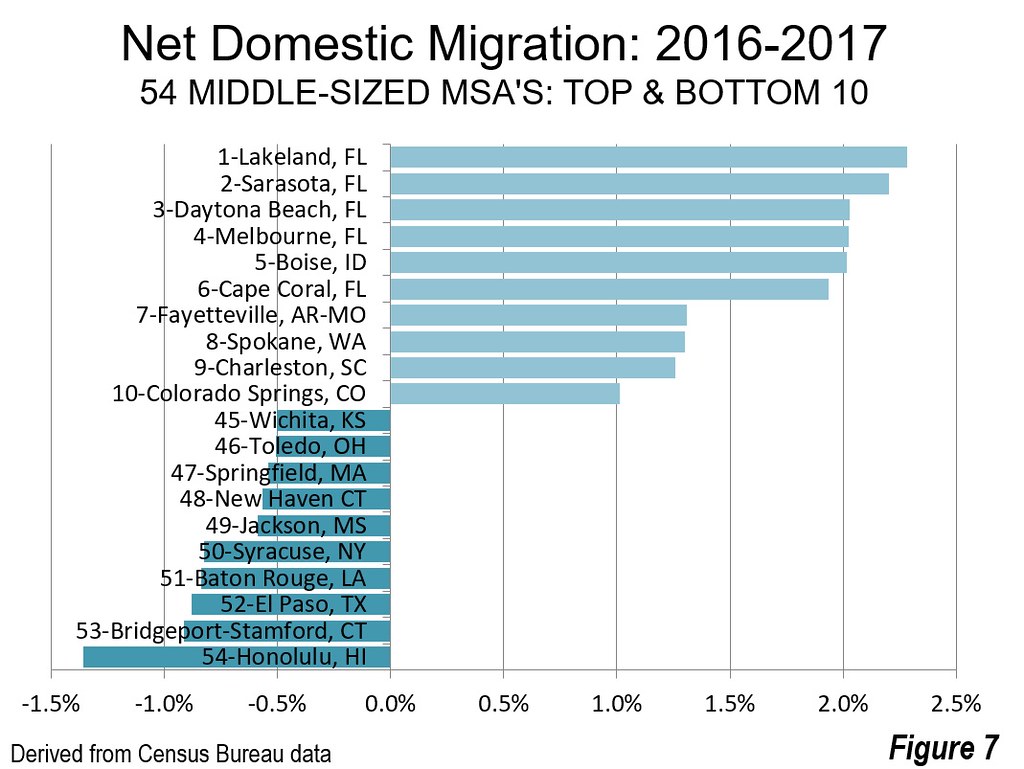 The 10 major metropolitan areas with the largest growth from 2016 to 2017 were all in the South, except for Phoenix and Las Vegas. The largest loss was in Pittsburgh, which has experienced recurring losses. The population within the present boundaries of the Pittsburgh metropolitan area reached 2.77 million in 1960, 420,000 more than today (Figure 8).

Lakeland was also the leading large metropolitan area for overall growth. Boise, Provo, UT and Fayetteville, AR-MO were also among the top gainers, along with other Florida metropolitan areas. Youngstown, OH experienced the greatest loss, now down 20 percent from its 1970 peak. Honolulu had the second largest loss and moved farther away from the million threshold it nearly reached last year (Figure 9). 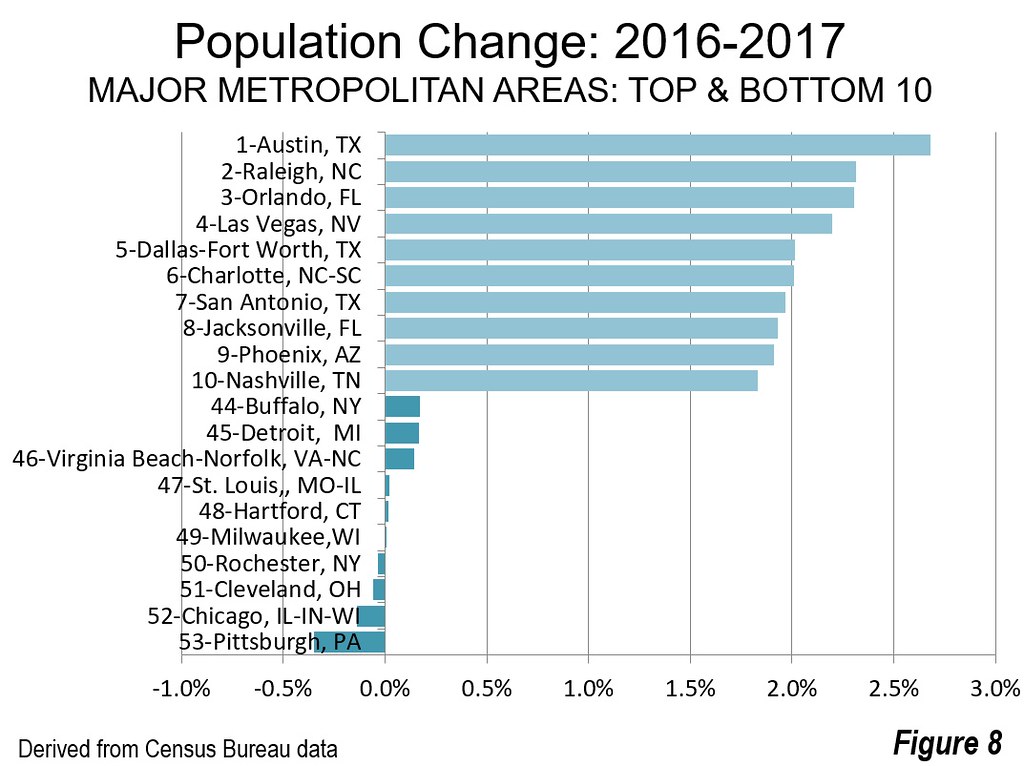 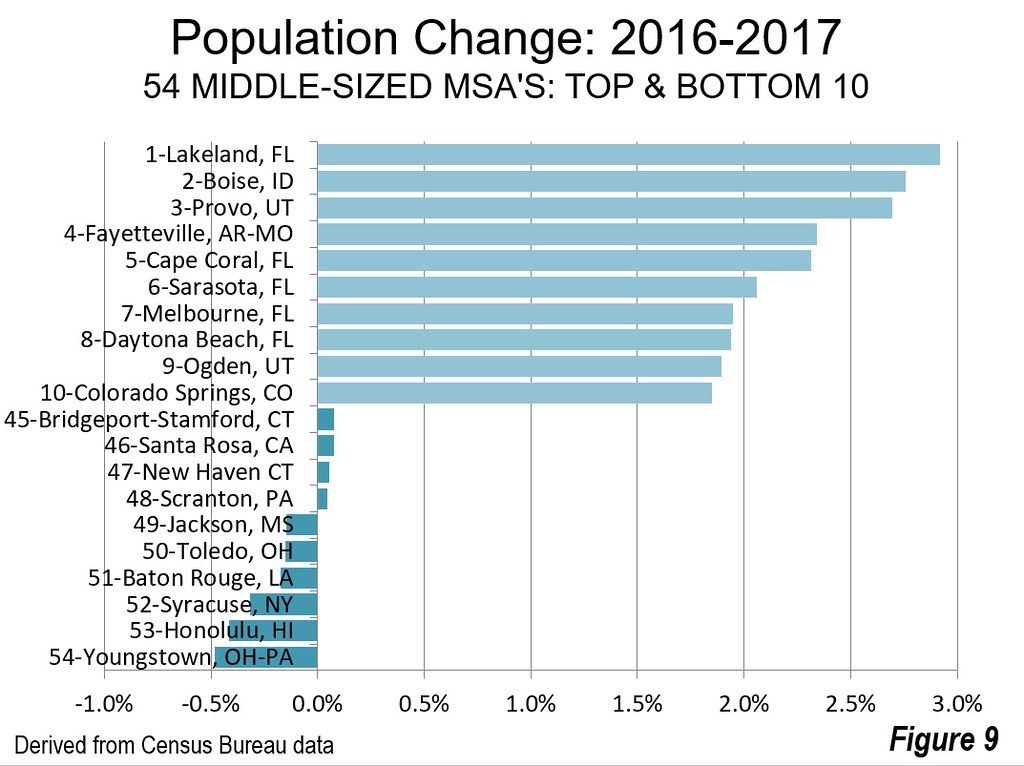 Meanwhile, the nation’s three largest metropolitan areas are stagnating. Los Angeles grew an anemic 0.19 percent compared to a national average of 0.72 percent. New York did marginally better, at 0.23 percent. In the city of New York growth has virtually stopped, increasing only 7,000 last year, compared to an average of 70,000 annually earlier in the decade. One borough — Brooklyn — actually lost population, a reversal from the early 2010s when annual increases exceeded 30,000. Suburban New York, long a laggard, added five residents for every new City resident in 2017. Chicago lost 0.14 percent and has returned to little more than its 2012 population.

Some “Rust Belt” metropolitan areas have long had among the slowest growth such as Detroit, Chicago, Milwaukee, Buffalo and Pittsburgh). Yet this year saw a positive net domestic migration in Minneapolis-St. Paul, Kansas City, Columbus, Cincinnati and Indianapolis. Just five years ago (2012), these metropolitan areas attracted fewer than 2,000 net domestic migrants combined. By 2017, the figure had risen to 43,000. Their near average or lower than average costs of living, strongly related to house prices that are affordable, are a likely contributor.

At the same time, metropolitan areas with higher costs of living such as coastal California (especially Los Angeles, San Francisco, San Diego and San Jose), have experienced a significant deterioration in net domestic migration, expanding their annual loss more than seven times, from nearly 25,000 in 2012 to nearly 180,000 in 2017. Meanwhile, metropolitan areas over 500,000 in interior California have seen their net domestic migration rise from minus 4,000 in 2012 to 38,000 in 2017 (Riverside-San Bernardino, Sacramento, Fresno, Bakersfield, Stockton and Modesto). Population trends reflect the domestic migration decline, with coastal California growing nearly two-thirds less in 2017 than in 2012, and interior California nearing a 50 percent increase.

The 2017 population estimates show that there is a resounding “return to the suburbs,” with historical trends restored after a brief interlude caused by the Great Recession. At the same time, medium-sized metropolitan areas, with either small or no urban cores are gaining many more domestic migrants than their larger cousins. Regrettably much of the mainstream media, not to mention academia and some of the development community, has not woken up to this reality.

Note: Three major metropolitan areas have only one county (San Diego, Las Vegas and Tucson). Domestic migration data is available only at the county level (not, for example, by individual municipalities, except for city-county jurisdictions, such as San Francisco and Baltimore).

Photograph: Lakeland, Florida, which led the nation in population increase and net domestic migration gain among metropolitan areas with more than 500,000 population in 2016-2017. Credit: Mikerussell under CC License 3.0 via Wikimedia Commons

California’s Middle Class is in Decline Despite State’s Immense...

Landless Americans Are the New Serf Class
Scroll to top