Home ownership is finally increasing in the United States, following the housing bust. The Census Bureau reports that 63.9 percent of households owned their own homes in 2017. This represents the first annual home ownership increase in more than 10 years, as a string of losses followed the housing bust after 2006. The home ownership rate has continued to increase, and stood at 64.4 percent in the third quarter of 2018. This is just above the 64.3 percent average home ownership rate for the three decades ending in 1994. Much of the subsequent increase in home ownership was the result of the housing bubble (Figure 1). The authors of a Federal Reserve Bank of San Francisco working paper (Paolo Gelain of the European Central Bank and Norges Bank, Kevin J. Lansing of the Federal Reserve Bank of San Francisco and Gisle J. Natvik of the BI Norwegian Business School) characterized this as:

Much of the angst about falling home ownership since the Great Financial Crisis insufficiently accounts for unusual, and hopefully not to be repeated influences. Yet the differences between metropolitan areas are enormous. 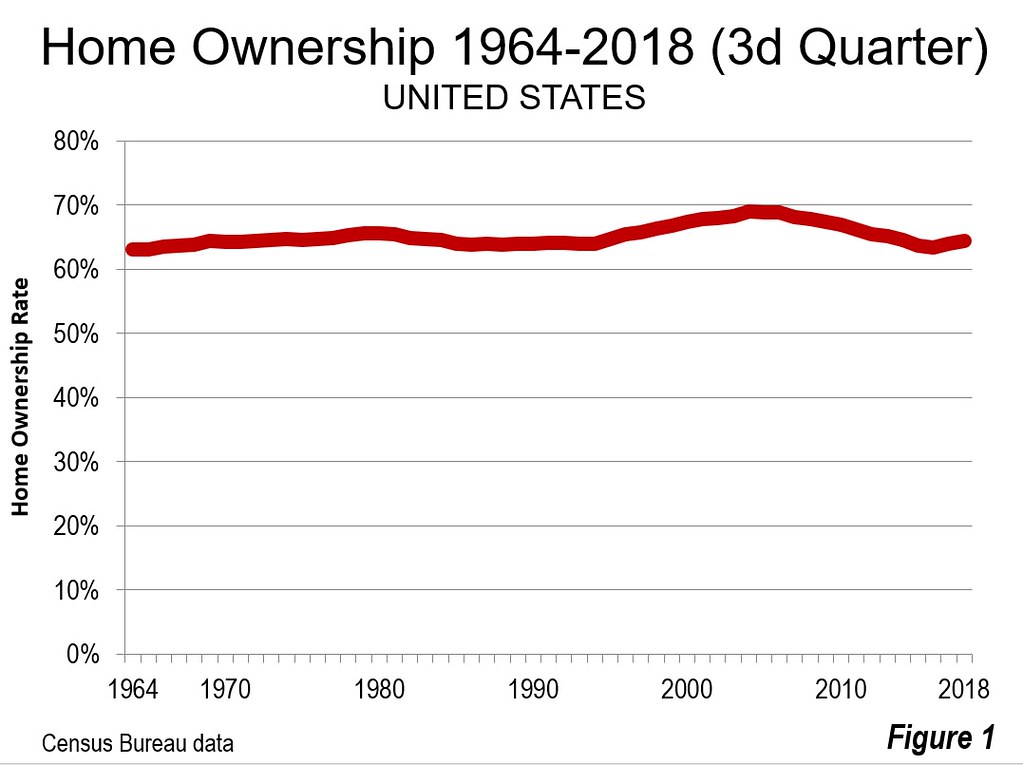 Pittsburgh, St. Louis (Missouri-Illinois) and Detroit ranked third through fifth in home ownership, they were followed by Salt Lake City, Birmingham, Raleigh, Louisville (Kentucky-Indiana), and Baltimore. All of the top ten metropolitan areas had home ownership rates of 66.6 percent or higher (Figure 2). 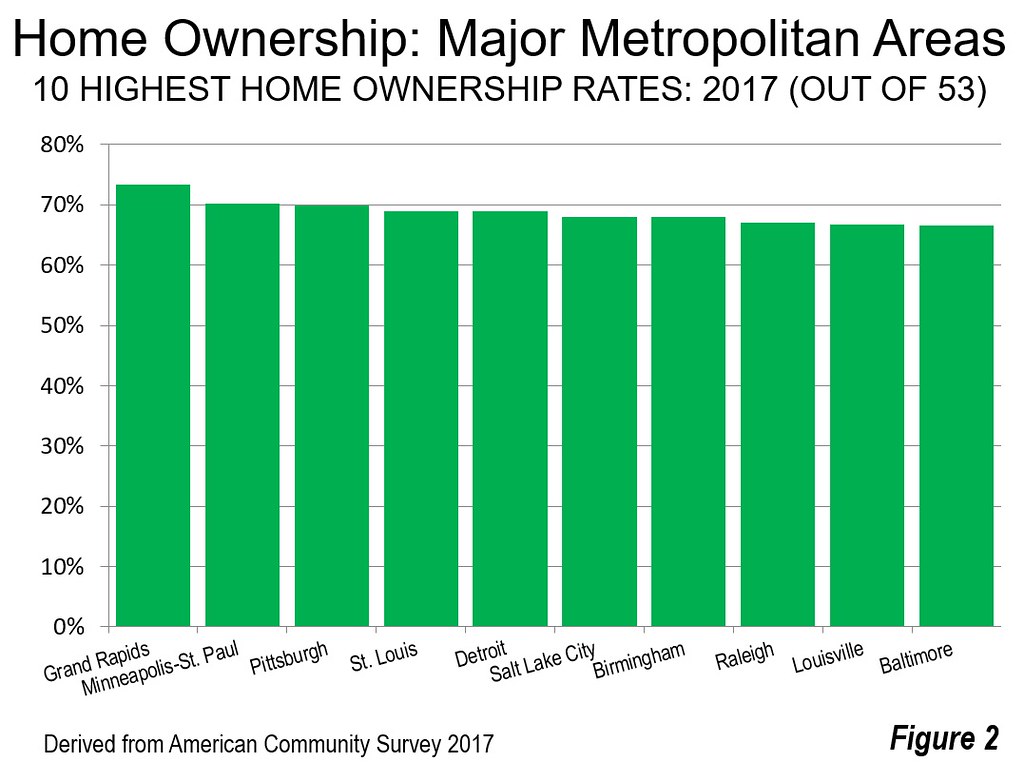 The lowest home ownership rate was in Los Angeles, at 48.4 percent (a ranking of 53rd). This is more than one third below that of leader Grand Rapids and 3.4 percentage points below New York (New York-New Jersey-Pennsylvania), at 51.8 percent. Three other metropolitan areas had home ownership rates below 55 percent, 51st ranked San Diego, 50th ranked Las Vegas, and 49th ranked San Francisco. The other metropolitan areas among the lowest 10 home ownership rates were all below 60 percent, San Jose, Austin, Miami, Dallas-Fort Worth, and Milwaukee (Figure 3). 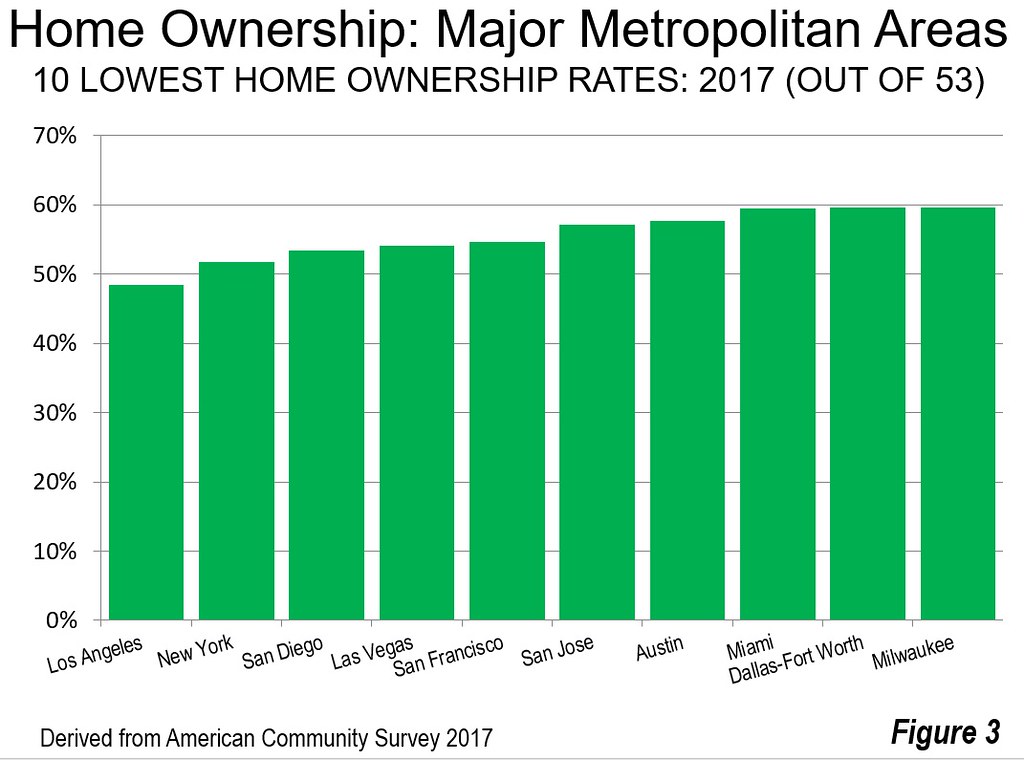 There have been multiple reports from California’s Legislative Analyst, as well as others tracing much of the higher housing costs to some of the most restrictive land use regulations, in a state with the highest urban population density in the nation. Further, California’s high house prices make it far more expensive to provide subsidized, affordable housing because its costs are tied to housing costs in the market. A consequence is that California has the highest housing cost adjusted poverty rate among the 50 states. 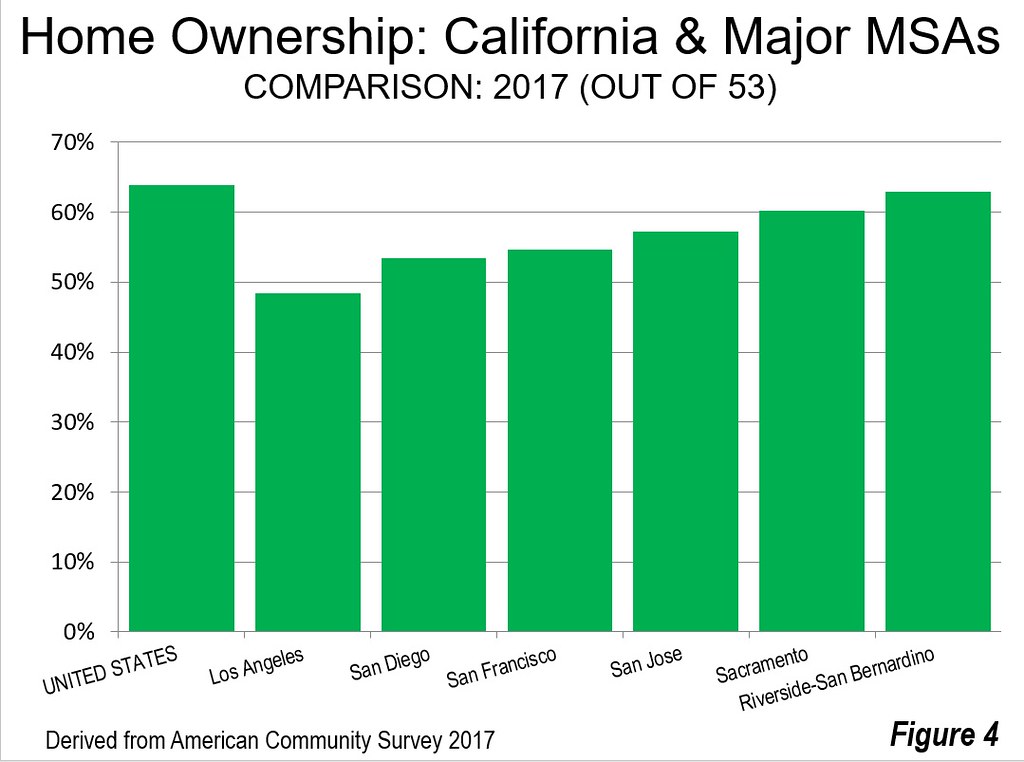 The Importance of Home Ownership

In a recent article, Cullum Clark, Director of the Bush Institute-SMU Economic Growth Initiative, reminds us that home ownership has been a priority of presidents since FDR (see: The Benefits of Home Ownership Mean We Should Still Believe in the American Dream). He says that “Providing a ‘hand-up’ to help lower-income people onto the first rung of the ladder to stable asset ownership is one of the most powerful engines for upward mobility and a sustainable middle class.” This is crucial to a prosperous and inclusive future.

Improving home ownership does not require liar loans or dishonestly rated securities. It can be accomplished by allowing competitive land markets to operate. This requires allowing starter housing to be built that can be afforded by the starter home consumers of the future, such as millennials and many minority households.

The Benefits of Homeownership Mean We Should Still Believe In The American ...