You are here: Home / Demographics / Suburbs and Exurbs Continue to Dominate Metropolitan Growth at Mid-Dec...

America’s suburbs and exurbs continue to receive the most population growth among the 53 major metropolitan areas. This is indicated by data in the just released 2013-2017 American Community Survey (ACS), which provides a mid-decade snapshot of US demography. With its middle sample year of 2015, the 2013-2017 ACS is most representative of the middle of the decade between the 2010 and 2020 censuses (Note 1). 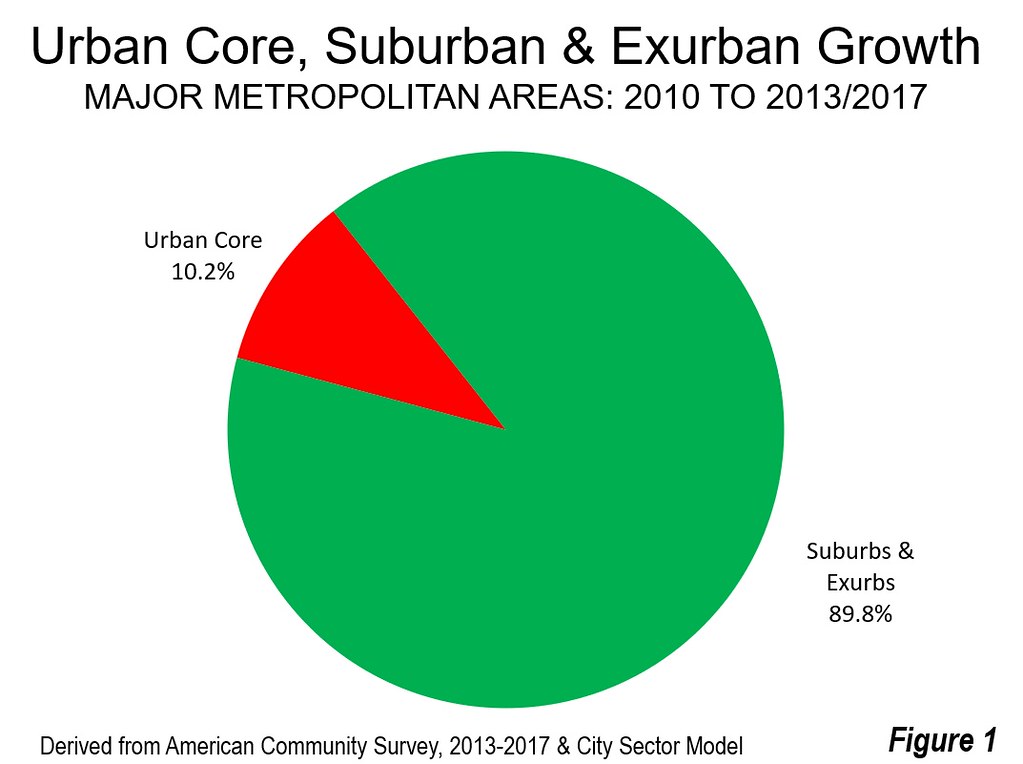 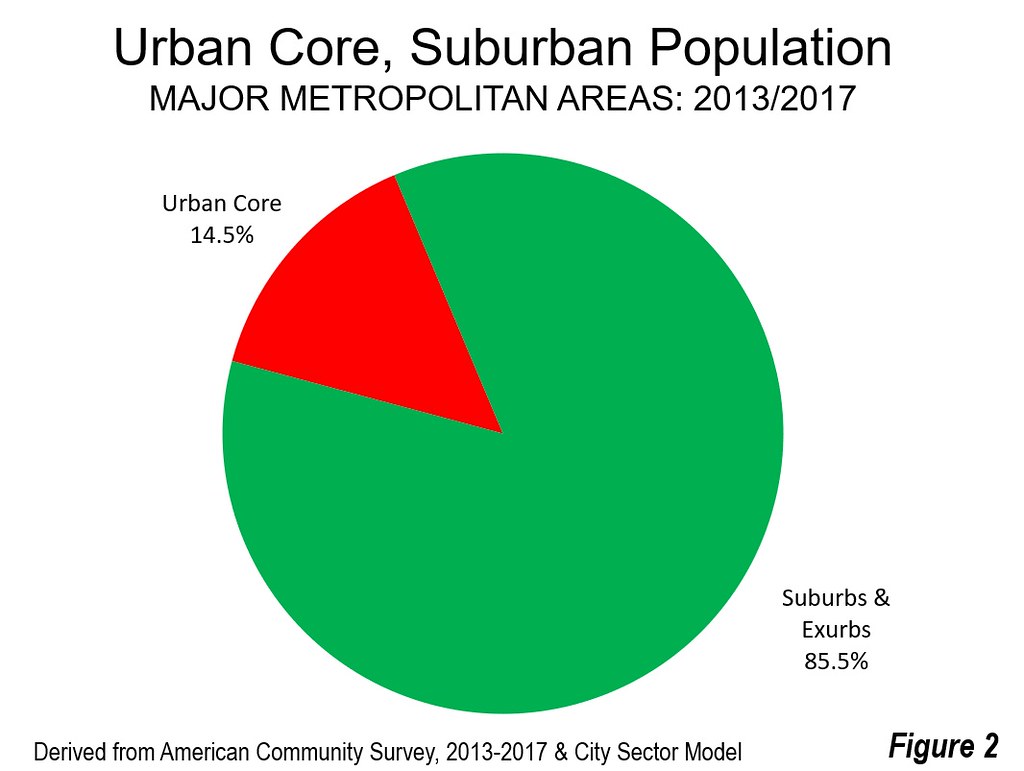 Only 10.2 percent of the major metropolitan growth was in the urban core, which includes the City Sector Model CBD (central business district) and its adjacent Inner Ring. Between 2010 and 2013-2017, the suburbs and exurbs added population at a 1.05 percent annual rate, 50 percent greater than the 0.70 annual rate in the urban core.

The population and market share trends among the five City Sector Model categories are indicated in Figures 3, 4 and 5. 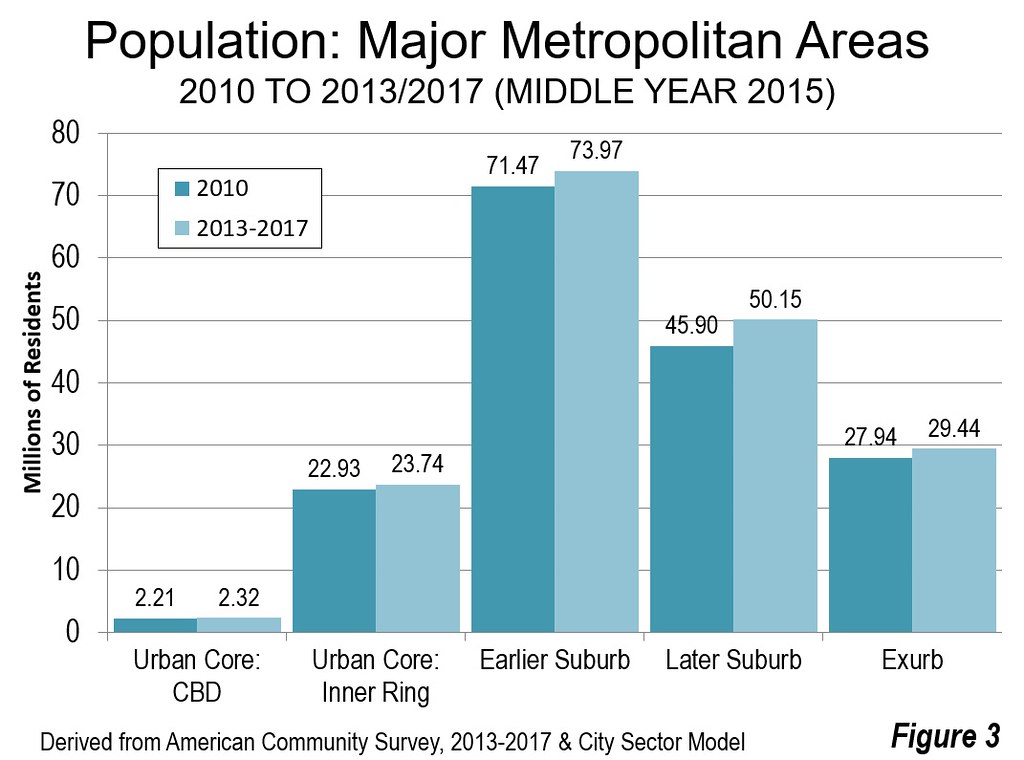 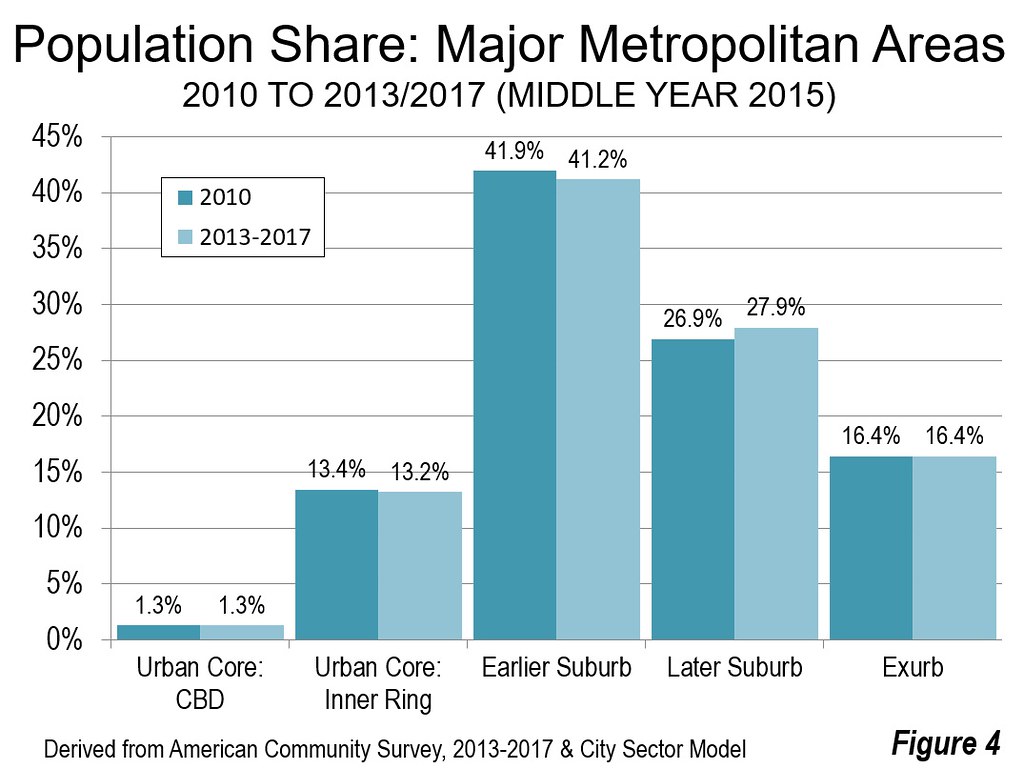 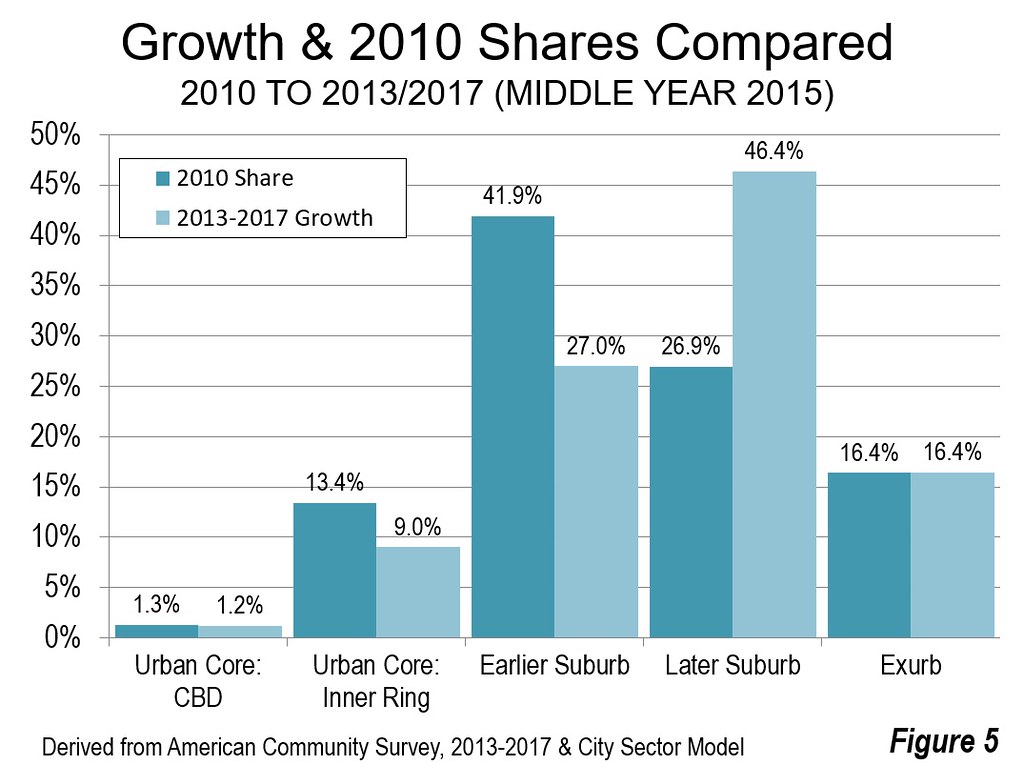 The estimates indicate that the largest population growth has occurred in the Later Suburbs (generally outer suburbs), which added 4.25 million residents from the 2010 census to 2013-2017. The Earlier Suburbs (generally inner suburbs) added 2.5 million residents and the exurbs added 1.5 million. Smaller gains occurred in the Urban Core: Inner Ring, at 0.81 million and the Urban Core: CBD, at 0.11 million. 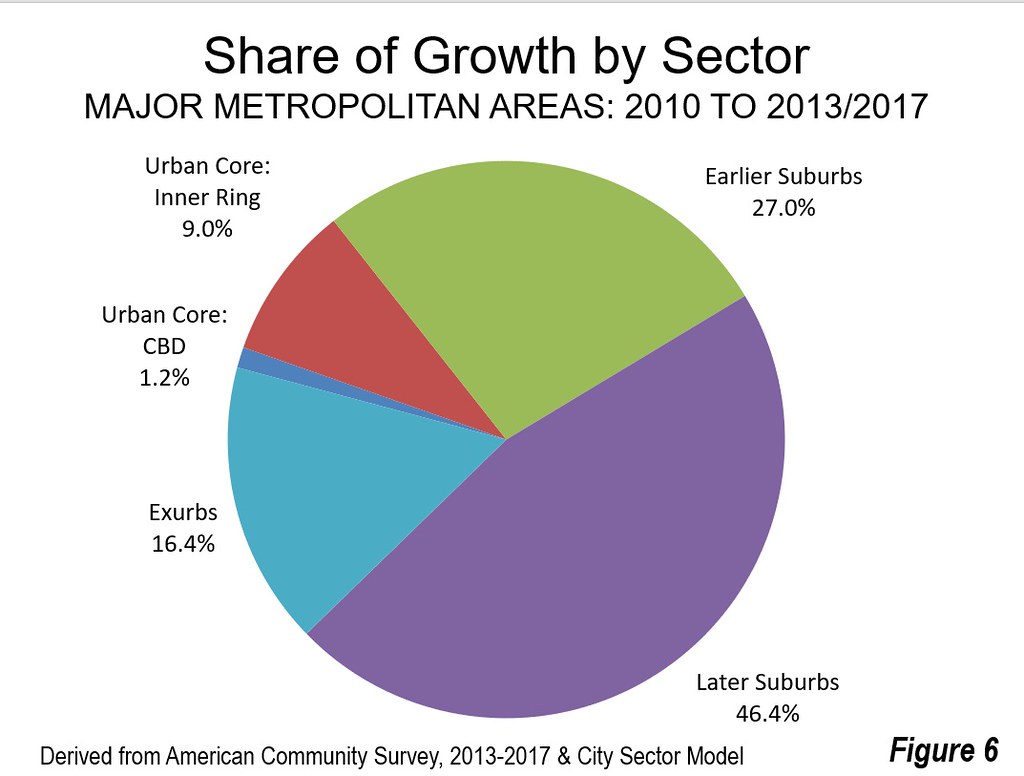 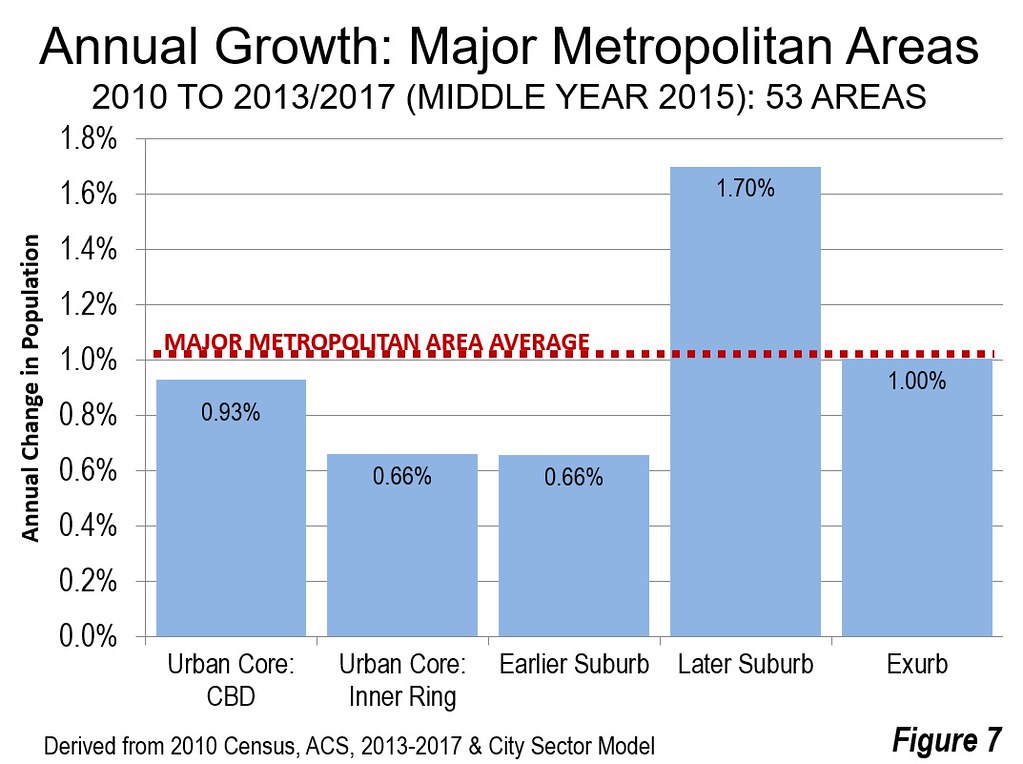 New York and the Rest

The predominant trend continues. At least since World War II, most population growth has been concentrated in the suburbs and exurbs. Despite all the blather and pronouncement about a “back to the city” wave, things have not changed very much overall several decades.

Note 1: The ACS 2013-2017 is the most current release of the ACS 5-year product, which is released annually. It is the result of equally weighted surveys taken in each year from 2013 through 2017. Thus, characterizing results from the 2013-2017 ACS as 2017 data is inappropriate, since 80 percent of the data was collected in years before 2017. The middle year of the 2013-2017 release is 2015, making it the most representative mid-decade sample for the smaller geographies not reported in the annual sample, such as census tracts and zip codes (as used in the City Sector Model. This includes zip codes, which are used in the small area analysis produced by the City Sector Model (Note 2).

Note 2: The City Sector Model classifies small areas (ZIP codes, more formally, ZIP Code Tabulation Areas, or ZCTAs) in metropolitan areas in the nation based upon their function as urban cores, suburbs, or exurbs. The criteria used are generally employment and population densities and the extent of transit use versus car use (Figure 9). The purpose of the urban core sectors is to replicate, to the best extent possible, the urban form as it existed before World War II, when urban densities were much higher and a far larger percentage of urban travel was on mass transit. The suburban sectors replicate the automobile-oriented suburbanization that began in the 1920s and escalated strongly following World War II. The suburban areas are largely within the continuous built-up urban areas, while the exurban areas are generally in the metropolitan areas, but outside the built-up urban areas.